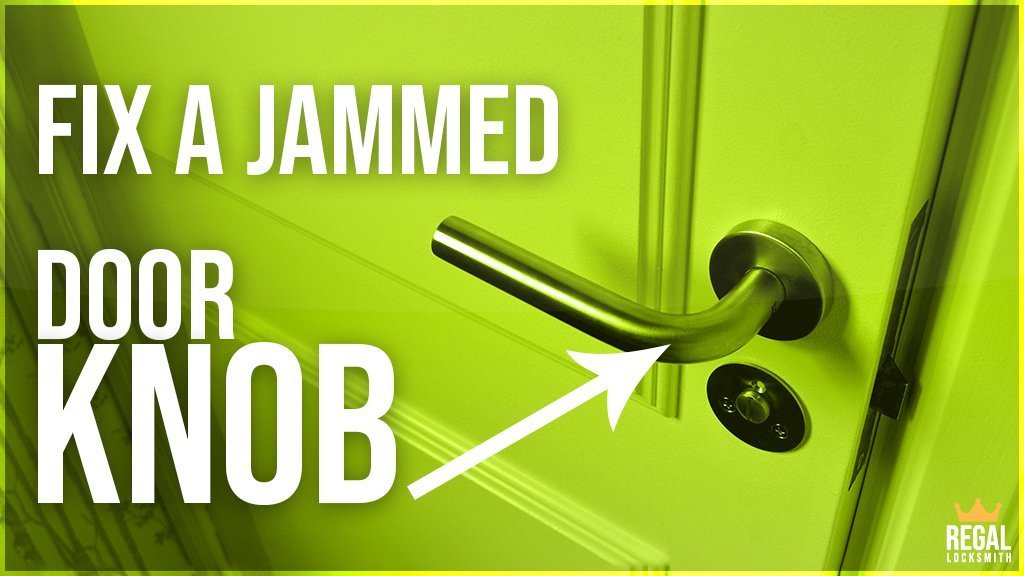 Having a doorknob that turns but won’t open can be frustrating, inconvenient, and dangerous. Plus, calling in a locksmith can be expensive. Fortunately, it’s often possible to quickly and safely fix a faulty door lock yourself without any specialized training. All you need is a little patience and a few standard tools. In a matter of minutes, you can have to problem solved and enjoy that great feeling of accomplishment.

Your Door Knob Turns, But It Won’t Open.

The Lock Is Jammed Or Stuck.

The key to repairing a jammed or stuck lock is identifying the problem that led to it becoming stuck. Then you can decide if the problem can be fixed or if the lock needs to be replaced. Often you can save yourself some money by keeping the doorknob and simply replacing the locking mechanism. In this article, we will look at several reasons your doorknob and lock may have become stuck or jammed and provide solutions for each problem. Some common problems you may be having a problem with your doorknob and lock are:

If the doorknob, spindle and latch are fine, carefully reattach and tighten them.
This should solve the problem.
If the spring or a latch housing component is damaged, replace the entire latch housing and the lock should work properly.

If the lock is old, the bolt or the intervals may be gummed up or rusted and seized up in the open position. The key may be damaged or worn and no longer fits properly in the cylinder.
If there’s a thumb turn, try actuating the bolt with it. If it won’t move, the problem could also be a broken cylinder.
Sometimes a misaligned door can prevent a deadbolt lock from being able to move into the ‘locked’ position.

Take a close look at the key to make sure it is not damaged or worn.
Check the door to make sure it is properly aligned when closed and is not blocking the bolt from sliding into the slot.
Remove the deadbolt lock from the door.
Carefully examine it to see if it is gummed up or rusted in the open position.
As long as the door is not misaligned and the key is not worn, bent or otherwise damaged, the problem is most likely rust or something gumming up the internal parts of the deadbolt lock.
The simplest solution is to purchase and install a new deadbolt lock on your door.

If the deadbolt lock on one of your doors is in the locked position and has become stuck, you have to follow the same basic steps outlined above for deadbolt locks that are frozen in the open position. First, you check the key to make sure it is in good condition and not too damaged to work. In older locks, you have to determine if it is rust or something else gumming up the deadbolt lock’s internal working and preventing it from moving. Plus, a misaligned door can make it near impossible to open a locked deadbolt lock.

Begin by carefully examining the key to see if it is twisted, bent, worn or otherwise damaged and unable to properly manipulate the parts within the cylinder.
Check to see if the door is properly aligned. Sometimes pushing or pulling the door while turning the key or thumb turn can improve the alignment and free the bolt from the locked position.

If the key isn’t damaged and it is not the alignment of the door that is preventing the deadbolt from being unlocked, the only choice you have is to remove the deadbolt lock from the door to see if the bolt can be manually moved into the ‘unlocked’ position, the problem can be fixed or you have to replace the lock.

The doorknobs on many kinds of interior doors often have a lock button built into them. When one of these types of locks gets stuck, it is often very easy to solve the problem. In fact, there are a number of quick fixes people can use to get a stuck lock button on a doorknob loose and working again.

If the reason the lock button is stuck is because the latch bolt frozen, you may be able to stick a flathead screwdriver into the gap between the frame and the door and activate the spring-loaded release latch.

If all else fails, you can simply take off the screws, remove the doorknob and clean any parts of the lock that are rusted or gummed up.
Finally, test the doorknob lock to see if it works. If it does, reinstall it.
If the doorknob lock doesn’t work after it is cleaned, then it has to be replaced.

You May Need A Locksmith

Many minor problems can prevent your lock from functioning correctly. If you are unable to fix it properly yourself, call a professional licensed locksmith. A lock that’s not functioning properly can leave you in danger and at the mercy of thieves and burglars.